We walked down a fairly steep dirt road covered in rocks and small pieces of trash flanked by walls of canvas shouting to me that we had arrived at our final destination, the purpose for my visit, a Syrian refugee camp.  The small one room, sometimes two room tents were built of wood and held together by whatever must have been available in the moment they were built.  The flimsy structure was covered by a blue or white tarps.  Each tent usually had a some kind of temporary wood burning stove inside obviously used for heat and for boiling water.   The smell of refuse and human waist was sadly one of the first things our senses required us to notice as we walked down this well traveled dirt road.

We were directed to turn to our left by our guide and were welcomed into a tent where we removed our shoes and stepped onto a mat inside this small maybe 12ft by 12ft room.  Our host was a mother named, Samuda, she was very polite as her daughter, Amira, offered us turkish coffee.  Out of respect for this family and this kind gesture, I sipped at this cup of turkish coffee while we sat on the floor and began our conversation. 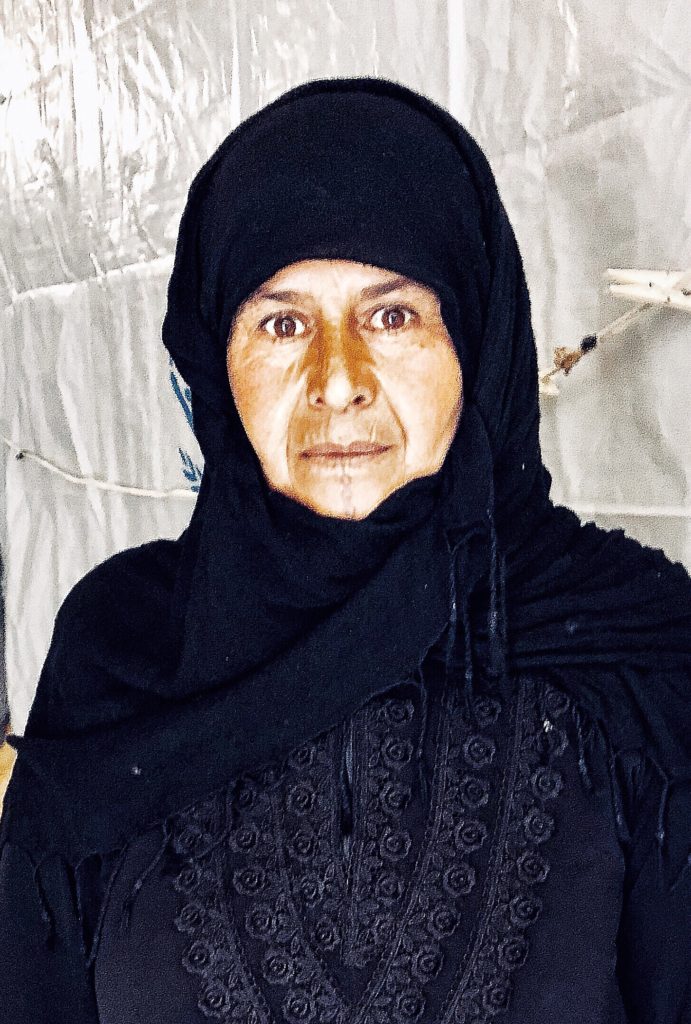 I was joined by our World Vision host Steve Hass, Jordan Hansen and our interpreter.  We sat quietly and listened for a few moments as this mother began to tell us her story.

She began with a look of sorrow as she described her ten children.  Five of which were still alive.  Her husband had died a few years ago.  Samuda and her children escaped a small town in the hills of Syria called Homs.  They escaped Homs with only their lives as their home was leveled by bombs dropped by the current governing regime of Syria.  Samuda and her three youngest children ran for their lives heading southwest to the Lebanese border where they were allowed to find safety.  Five of her children were killed in the attacks on Homs and her two older children have escaped to northern Syria but she has no knowledge of their fate.  She fears they would have joined the Syrian Resistance Army.

As she spoke through tears of her ten children and her late husband, a slight smile broke through her darkness as she introduced us to her eight year old daughter, Amira.  Amira, was shy but teaming with a beautiful smile and the energy only an eight year old child can possess.  Amira, peaked from behind her hands as her mother described her life.  Amira has never been to school or received any education, most of her life she has only known this tent as home.  Education simply hasn’t been an option for any of Samuda’s three remaining children.  Amira was asked what she wanted to be when she grows up and her answer was, ” I want to be a doctor so I can help people.”  Amira stayed in the room for the whole conversation until her mother sent her to get her older sister, Hala.

Hala walked in the room adorned from head to toe in a blue robe and head piece with only her face appearing in the shadow of her clothing.  She kept her eyes focused on the ground and talked only when asked a question.  She had seen more in her twelve year old life than should be expected of any human.  Hala’s mother described her oldest daughter as her helper around the tent.  Hala has never been to school, and is not allowed to leave the tent as her mother’s fear of losing another child overwhelms the atmosphere of this Syrian home.

We asked about the her remaining son, and were told he was still at work. Bashir is an eleven year old boy who’s been working in the fields for a few years now helping to make enough money in to purchase only the necessities of this humble existence.  He makes 4.00 a day for hard labor.  He’s eleven.  He works 7am to 5am every day and makes $4.00.  He’s eleven.  He works hard labor.  I can’t write that just once as I want all of us to not pass that detail over as insignificant.  As a father of boys, I felt a deep emotion begin to creep up my throat as anger caused the hair on my limbs to stand at attention.  HOW IS THIS POSSIBLE?  This is how young boys are joining causes like ISIS and other terrorist organizations.  They find an option that promises a better life.  They don’t have the privilege of seeing the news and understanding the things we understand about the different factions.  They are sold a false hope of fighting against supposed oppressors.  Sadly, it’s not hard for these aweful organizations to find plenty of volunteers as young boys and young men are born into a life of nothing.  More on this topic in the future. . . .

Our time in the tent ended with Samuda crying, she has lost all hope of a better life.  She has nothing to go back to, her home is gone, destroyed.  She has lost half of her children and her husband.  She lives a life of absolute fear and has no idea what the future will hold.   We prayed with her quietly thanking her for allowing us to visit.

I asked her if I could take her picture as we were leaving only so you could look into the eyes of this mother who has lost all, so you could pray God’s mercy upon these desolate people.  Our only hope for truly helping these people is the HOPE of Christ.  This land doesn’t allow evangalizm because it is seen as proselytizing so the only way to show Christ is to be Christ.

How can we be Christ to these hopeless people?  We can provide water, we can provide food, we can provide clean latrines.  Most of all we can love them unconditionally, I’m proud to say that the world vision team here in Lebanon is doing that with amazing success.  The challenge is the lack of resource.  Over the next couple of weeks we will explore how we can best help specifically in this area of need.  For now, will you join me in praying not only for these people but for God’s answer to this horrible atrocity.   The answer to this problem will absolutely require an act of God and all of His people working together to bring hope and healing to these most precious Syrian people.

Tomorrow, I will give you the story of our meeting with Imam Muhammed.