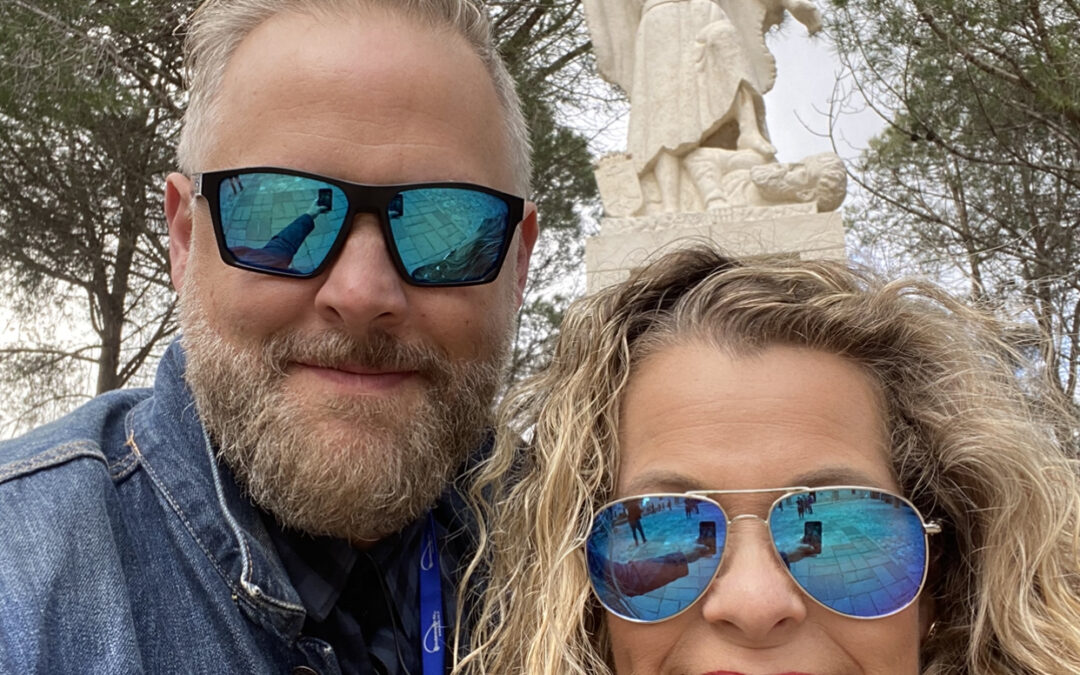 My eyes slid open at 2am this morning as my internal clock remains in California mode. I forced myself to go back to sleep. The images in my mind of what I expected to see in just a few hours were more detailed and alive than normal. I finally fell into a deep sleep and woke in what seemed to be only a few minutes but was actually 3 hours later.

This was the day I’ve thought about for countless years. Today I would place my feet where Jesus walked, where Phillip, Peter and Paul spent a good part of their lives speaking the truth. How would this feel? How would I respond? What would God say to me? Gretchen and I quickly put our things together and prepared for departure. As we do so, I settled on this thought, God, this is your time, nothing will distract or take away, please say what only you can say, teach us what only you can teach, and lead where only you can lead.

We arrived at Caesarea and walked through countless ruins from Herod the Great, the illegitimate king Israel. We continued on to Mt Carmel, this is where God had something detailed to say specifically to me. As we drove up a windy narrow road for approximately 40 minutes, I noticed the groves of olive trees and cedar trees one after another. The beauty of this country was so different than I somehow expected. My perspective had been shaped by stories, the bible, pictures and conversations. Yet, I was way off. We walked to the top of Mount Carmel and I immediately felt a lump in my throat as my imagination began to run wild with the thoughts of what played out in the very place I was standing. I began to think of the prophet Elijah who single handedly stood against the craziness of the day as read in 1 Kings 18. I’ll leave you to read this chapter and picture a couple things with me. How does this man have this confidence? What would happen if each of us would put to death the false God’s in our lives? Doug, what would happen if I could reveal to you the simple things that hold you back from becoming EVERYTHING I’ve called you to be?

Elijah gave direction to the prophets to set up the altar and pick out the cow’s they wanted to use. He made a statement, put nothing below the altar, simply the wood and the cow. He specifically said this to keep the conniving prophets from starting a fake fire as they had done many times before. They did as directed building an altar and tying down the animal on the wood planks. At this point, imagine with me 450 prophets of baal dancing, screaming, calling on a God who didn’t exist to come down and burn up the animal on the altar. They even cut themselves and caused the blood to flow hoping somehow something would happen. How often do we put our trust our hope in things that simply waste our time and energy and miss the one true thing that is always present? Elijah was about to set a standard that would never be forgotten. As the prophets of baal continued from morning through the afternoon we know nothing happened. Elijah began actually to taunt them until finally they gave up. Elijah wanted to up the stakes and asked those watching to dump water over the sacrifice and wood not once but three times. Finally with a few well spoken words, Elijah prayed, he asked God to show Himself so those watching could make a commitment of whom they would follow. After a short prayer, a mighty fire fell from heaven and consumed the altar and not only the sacrifice and the wood but all of the water that had pooled up around the altar.

God was there, He continues to be near, He stands next to you and wants to be so real to you and to me. It’s only up to us to respond to Him and follow Him. I don’t know where all of you are today in reflection of the kind of life you want to live, but I know this, God has a specific plan for each of us if we’ll simply trust Him, if we’ll step out in faith to follow Him, if we’ll commit to Him. The people of Elijah’s day were making wrong choices to follow after false God’s. Our God’s today may not be prophets of baal worshiping a bunch of made up stone God’s but they are no less God’s in our lives. Our false God’s are a little harder to identify but if we’ll take a moment and seek God, He will show each of us what needs to be cut out.

Yep, I know, kind of intense for day 1. I can say I expected this experience to be intense and I can say it certainly was. Tomorrow, we will visit the Sea of Galilee where Jesus walked on the water and we’ll have an opportunity to be baptized in the Jordan river close to where Jesus would have also been baptized. Wow, so with all that being said, take a couple moments and talk to our amazing God, ask some good questions that sit quietly and listen. I bet He will answer. . . . .